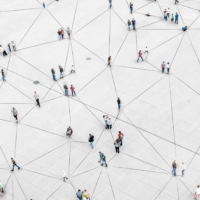 Interview with the Vice-President

On 13 November 2019, Ms Tea Glažar, MSc, was elected as the COST Association’s Vice-President during the 207th meeting of the Committee of Senior Officials held in Limassol, Cyprus. The appointment lasts for three years and the Vice-President will be responsible for chairing the Executive Board which oversees the COST Administration’s activities.

Ms Glažar is currently Secretary of the Science Division, Science Directorate at the Ministry of Education, Science and Sport in Ljubljana. Here, among other roles, she is the Slovenian representative to the COST Committee of Senior Officials, as well as Delegate of the Republic of Slovenia to the CERN Financial Committee and Slovenia’s adviser to the President of the CERN Council. She is also vice-president of the board of the Association for the support of the South East European International Institute for Sustainable Technologies (SEEIIST).

I am striving for continued and open dialogue between the EB, CSO and the Association.

How do you see your role as Vice-President of the COST Association in the next three years?

As Vice-President of the COST Association, I am responsible for the overall guidance of the Executive Board (EB). As chair of the EB, I have a supervision and monitoring role on how the Association functions. In close collaboration with the President and Director, the EB prepares the agenda for the Committee of Senior Officials (CSO) which is the supreme decision-making body.

Having been elected by the CSO, I am striving for continued and open dialogue between the EB, CSO and the Association. My aim is to guarantee a smooth decision-making routine to the benefit of COST Actions and Europe’s scientific community at large. In recent years, COST has taken some decisive and important steps towards Horizon Europe, the new Framework Programme for Research and Innovation, which enters into force in 2021. The CSO’s adoption of the COST Ministerial Declaration in 2016 and the COST Strategic Plan in 2017 has set the strategic priorities for years to come, articulating COST’s ambition to be at the heart of the European Research Area (ERA).

What would you like to focus on during your mandate?

During my three-year mandate, I would like to highlight some key challenges: As Horizon Europe is just around the corner, it is important to focus on recognising COST as the leading open networking tool in ERA. Every year, more than 45,000 researchers (of whom over 45% are early-career investigators) are involved in COST networking activities, regardless of their career stage, country of origin or areas of interest. Thus, COST provides structural support to the ERA, widening the research and innovation (R&I) base in Europe and promoting cooperation in science and technology. COST should maintain this leading role while strengthening close cooperation with other important ERA instruments and mechanisms in order to reinforce its added-value services, such as the COST Academy.

Another challenge is international cooperation. COST will foster near-neighbour-country participation in COST Actions and will further engage with a selected number of International Partner Countries through the new COST Partner Member status.

Over the last year, COST has launched several new initiatives which are currently in a pilot phase, such as the COST Innovators’ Grant and the Cross-Cutting Activities. The thorough planning, implementation, monitoring and evaluation of these initiatives requires the necessary focus and follow-up.

Many of our researchers report that COST is an easy-to access instrument and an efficient pre-portal for following up European funding for R&I.

On a more horizontal level, I will focus on the next COST Ministerial Conference scheduled for the first half of 2021. This is an important milestone for evaluating COST achievements over the last five years and an opportunity to set its future political and strategic challenges in the ERA and beyond.

Having come from Slovenia and been in touch with its research world, what would you say is the main benefit for researchers from Inclusiveness Target Countries who participate in COST Actions? How does COST contribute to ‘brain circulation’ in Europe?

Looking at Slovenia’s representation in COST Actions, we can see a positive trend in rising yearly participation rates (from 55 % in all Actions in 2012 to 82 % in 2018). Here, the role of our Slovenian COST national coordinators has been very important.

COST operates in an inclusive manner, taking advantage of Europe’s diverse, multicultural and highly skilled population. This approach connects Europe’s ‘pockets of excellence’ providing structural support to the ERA, widening Europe’s R&I base, and promoting cooperation in science and technology with other countries beyond its current membership.

Simple and low-barrier processes for universal access to networks of excellence have been developed, providing new participants with a highly rewarding start-up package in the R&I world. This concept of mutual benefit is an integral part of every COST Action and highly valued by participants.

COST Actions help younger researchers (doctoral students and postdoctoral researchers) to network with other researchers, which results in new projects, new ideas and new collaborations. The Actions enable researchers to develop and expand a research network with colleagues across Europe and beyond. Many of our researchers report that COST is an easy-to-access instrument and an efficient pre-portal for following up European funding for R&I.

In the case of Slovenia, we also see a positive trend in the annual increase in leadership positions in COST Actions, which is the result of new mechanisms for empowering researchers in leadership and enhancing science administration skills. Many researchers have mentioned that COST Actions have helped them to develop science management and leadership skills and to advance their careers.

As to brain circulation, I would rather use the term ‘circulation of knowledge’. In my opinion, this is one of COST’s key characteristics; enabling scientific breakthroughs.

As to brain circulation, I would rather use the term ‘circulation of knowledge’. In my opinion, this is one of COST’s key characteristics; enabling scientific breakthroughs.

A future ERA priority is to promote knowledge and brain circulation at all levels (national, EU, global) and help reduce the undesirable phenomenon of brain drain. COST serves as an appropriate instrument here, providing networking opportunities for researchers and innovators to strengthen Europe’s capacity to address scientific, technological and societal challenges.

How do you envisage the future of the COST programme in the European Commission’s Horizon Europe?

Since 1971, COST has created an impact through networks by offering European researchers and innovators a simple and flexible pathway to participating in the best science and technology networks in Europe. Therefore, COST is one of the strategic instruments in Horizon Europe as it is committed to reinforcing its role as ERA’s leading networking instrument while creating an even greater tangible impact on society.

In Horizon Europe, COST will be part of the Widening Participation and Spreading Excellence pillar, alongside instruments such as Teaming, Twinning and ERA Chairs. This part of the Framework Programme aims to reduce disparities in R&I performance by sharing knowledge and expertise across the EU. COST is ideally placed in this pillar.

As demands for scientific excellence in Europe and beyond are high and there are many societal challenges to be tackled, the role of COST and its budget in Horizon Europe must be strengthened. The attractiveness of COST has led to a success rate of 10 %, which means that plenty of excellent proposals are not funded. Increasing the budget to approximately EUR 600 million for the entire Horizon Europe period will enable a success rate of at least 15 %. It will give COST room to further strengthen its core business by expanding the number and reach of COST Actions and offering participants greater added value, such as the COST Innovators’ Grant and the COST Academy. We believe that a budget increase for COST within Horizon Europe will also be reflected in more direct support for researchers from the countries that are members of the COST Association.

It is important that Horizon Europe funding is sufficiently flexible and sustainable to enable COST Actions to be timely and efficiently implemented and able to run without any difficulties.